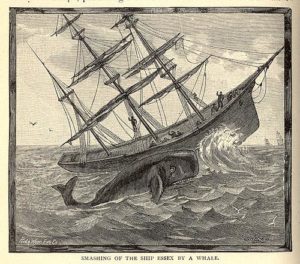 The Wreck of The Essex: Background.

The Essex, a strong 3 masted oak ship that was known for its strength and “Luck”. Originally it was a merchant ship when it was first launched in 1799 before eventually becoming a whalers ship, working from Nantucket Island, Massachusetts. But sinking of the Essex has lived in infamy. The inspiration for Moby Dick and a huge blow to the whaling culture of Nantucket.

The USA was the worlds whaling capital during the 19th century, Nantucket itself was the main contributor. The industry began quiet indecently by making use of the bodies of whales that where washed ashore but soon expanded to become the bedrock of the Islands economy. Many men won fame from their contribution to the industry, becoming local celebrities. Benjamin Worth had sailed since he was 15, going on to become one of the islands most respected captains. By the end of his career he had banked 870,000 sea miles and brought back nineteen thousand barrels of oil.
The industry had its favourites, Humpbacks whales and Right Whales which were found in the American coast were a staple of the whale hunters.

August 12th 1819 was the start of what would be any ordinary voyage for The Essex. The fresh faced young captain, George Pollard, Jr (29) was braced for three years at sea. The crew was comprised of  men who were mainly from Nantucket with only a handful of off-islanders. Many on-board knew each other, 17 year-old Owen Coffin for example was the captain’s cousin. Pollard had even taken it upon himself to meet with the boy’s mother, swearing to protect her son. This makes it so obvious how ingrained the whaling industry was on the island.

On August 14th the ship left to pursue whales along the coast of South America. But only 2 days into the journey the ship was caught in a “Squall”, which meant the winds suddenly changed and became harsh. The Essex lost two of the small whaling boats and lost its topgallant sail. Regardless to the damage The choice was made to continue sailing without repairing the damage. Whispers of doubt temporarily filled the ship as the crew wondered if this was a bad omen. It didn’t help matters that the loss of the topgallant sail made their movement extremely slow.

The spirits rose when they found their first Sperm whale on the coast of Rio De Jenerio,  from here they enjoyed successful hunting. Managing to capture no less than 10 whales by May. The hunt was not an easy affair. Typically the harpoon was fired not to kill but to first capture. Once the whale was caught the men would board the small whale ships to follow and trap the animal to tire it out. Once the Whale was tired and valuable then the men would dispatch it. The three remaining whale ships where manned by one commander and selected crew members. Meanwhile at least two men would take care of The Essex. After this period of hunting the crew struggled to find more whales for some time. Until they happened upon another ship that advised them of hunting grounds further out in the South Pacific, it was far from the coast but for the promise of more prey The Essex sailed on.

This area of the ocean was filled with many small islands, some of which the crew stopped. Much to the horror of any naturalist, I’m sure. Whilst on the Galapagos Islands the crew elected to take 200 Galapagos Tortoises with them for potential food and when visiting Charles Island (Floreana Island) looking for more tortoises they managed to set a fire that ravaged the island. Natural scientists have even tasked this to be partially responsible for the extinction of the Floreana Tortoise and indigenous plant life.

The Essex enters infamy in November 1820. A Whale had been sighted and the hunt had begun, but during the pursuit the boat being managed by Owen Chase, the first mate, was damaged. The ship returned to The Essex to begin repairs. While Chase and the handful of men were working another whale appeared. A huge Sperm whale, estimated to be 85ft long. The whale advanced on the ship, ramming into the side. The whole ship shook, those on-board where silent in confusion. Whales may well be massive mammals capable of doing this damage but seldom did it ever happen. The silence remained until the whale again ‘attacked’. Swimming faster than before, ramming the bow of the ship and breaking it.

Far from the safe shores of Chile, with nothing but tiny whale boats, The Essex was sinking. The Crew had no choice but to abandon ship for the whale boats. Small Ships with no means of properly sailing, made all the worse by only having navigational equipment for one ship and slim rations. 20 men, at the mercy of the sea. They knew they had to get to shore as quickly as possible. But the choice of where was disputed. Captain Pollard proposed that they head to either the Marquesas or Society islands, which were roughly 2000 miles away. But the choice was vetoed by Owen Chase who noted the rumours of cannibalistic natives. Which in hindsight would be ironic. So, the course was set, they’d be attempting to sail the 4,000 miles to Chile.

We will continue the story of The Essex in the next few days, exploring just how it went wrong.

View all posts by Millie Castleton

Find me here on LinkedIn